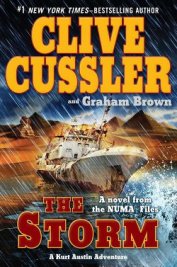 In the middle of the Indian Ocean, a NUMA research vessel is taking water samples at sunset, when a crew member spots a sheen of black oil ahead of them. But it is not oil. Like a horde of army ants, a swarm of black particles suddenly attacks the ship, killing everyone aboard, while the ship itself goes up in flames. A few hours later, Kurt Austin and Joe Zavala are on their way to the Indian Ocean. What they will find there on the smoldering hulk of the ship will eventually lead them to the discovery of the most audacious scheme they have ever known: a plan to permanently alter the weather on a global scale. It will kill millions . . . and it has already begun. Filled with the boundless invention unique to Clive Cussler, this is one of the most thrilling novels yet from the grand master of adventure.
Читать О книге

Years ago, an ancient Phoenician statue known as the Navigator was stolen from the BaghdadMuseum, and there are men who would do anything to get their hands on it. Their first victim is a crooked antiquities dealer, murdered in cold blood. Their second very nearly is a UN investigator who, were it not for the timely assistance of Austin and Zavala, would now be at the bottom of a watery grave. What’s so special about this statue? Austin wonders. The search for answers will take the NUMA team on an astonishing odyssey through time and space, one that encompasses no less than the lost treasures of King Solomon, a mysterious packet of documents personally encoded by Thomas Jefferson, and a top secret scientific project that could change the world forever. And that's before the surprises really begin . . . Rich with all the hair-raising action and endless invention that have become Cussler’s hallmarks, The Navigator is Clive’s best yet.
Читать О книге The key to eternal life has been found beneath two thousand feet of icy water in an area known as the "Lost City." To a family of ruthless French arms dealers the Lost City is the key to world domination. To Kurt Austin, leader of NUMA's Special Assignments Team, and his colleague Joe Zavala, it may be their greatest—and deadliest—challenge of all.   From Publishers Weekly Kurt Austin, leader of the National Underwater and Marine Agency's Special Assignments Team, battles international evildoers again in the fifth installment of this excellent series. There are several parallel plots: a mysterious aviator has been found frozen in a massive glacier; a mutant seaweed is threatening to choke the world's oceans; a giant submarine is roaming the thermal vents of the deep sea area known as the Lost City; and the secretive, arms-dealing Fauchard family, run by ruthless black-widow Racine and her homicidal son, Emil, is up to no good. Also there's a mysterious 16th-century helmet, a search for the philosopher's stone and an island of filthy, mutant cannibals. Austin's love interest is lush, sensual Skye Labelle, an archeologist specializing in arms and armor ("She had a good body, but it would never make the cover of Sports Illustrated"). Kidnappings, hair's-breadth escapes, fierce battles, strange science, beautiful women and plenty of action add up to vintage Cussler. Of course, one of the secrets of the genre is to waste no time on ancillary details: "Before long, a cigar-shaped object came into view"; "Before long, they were stepping out of the cockpit onto the deck." Readers will find that, before long, they're racing through the pages as Austin and his band of merry men fight to stop the Fauchards from reaching the ultimate evildoer's goal: world domination.
Читать О книге Hailed as a hero for the new millennium, Austin is the leader of NUMA Special Assignments Team--and the threat before him now is definitely special. A confrontation between a radical environmentalist group and a Danish cruiser has forced Austin and colleague Joe Zavala to come to the rescue of a shipful of trapped men; but when the two of them investigate further, they discover that something far more sinister is at work. A shadowy multinational corporation is attempting to wrest control of the very seas themselves-no matter what havoc results--and is killing anyone who attempts to stop them. When Austin's boat blows up and he just barely survives, it seems certain he is the next in line to die--but he cannot stop now. For the environmental disaster has already begun, and only he and NUMA stand in the way…Rich with all the hair-raising adventure and endless imagination unique to Cussler, White Death is an exceptional thriller from the grand master of adventure fiction.
Читать О книге 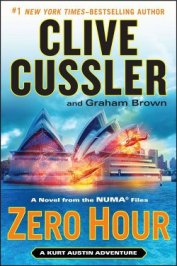 It is called zero point energy, and it really exists — a state of energy contained in all matter everywhere, and thus all but unlimited. Nobody has ever found a way to tap into it, however — until one scientist discovers a way. Or at least he thinks he has. The problem is, his machines also cause great earthquakes, even fissures in tectonic plates. One machine is buried deep underground; the other is submerged in a vast ocean trench. If Kurt Austin and Joe Zavala and the rest of the NUMA team aren’t able to find and destroy them, and soon, the world will be on the threshold of a new era of earth tremors and unchecked volcanism. Now, that can’t be good.
Читать О книге
×