When you've lost everything you love, how do you fight the darkness? Ava left Istanbul with a new identity, new name, and new magic she could barely control. Laid low by Malachi's sacrifice, she searches for help from the fabled Irina. But will the secretive women of the Irin race welcome or shun her? Ava's origins are still a mystery, and her powers are darker than any they've encountered before. The Irin world hangs in the balance. And as the children of angels battle their own demons, ancient rivalries among the Fallen threaten to wreak havoc on earth. Thousand of miles away, a warrior wakes with no memory of his identity or his people. Stumbling though the dark and twisted schemes of fallen angels, ravenous Grigori, and even his own leaders, he must find a way back to the one thing he remembers. A single voice calls him. Malachi has one mission. "Come back to me." THE SINGER is the second book in the Irin Chronicles, a contemporary fantasy series from Elizabeth Hunter, author of the Elemental Mysteries.
Читать О книге 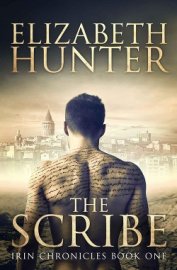 Hidden at the crossroads of the world, an ancient race battles to protect humanity, even as it dies from within. Ava Matheson came to Istanbul looking for answers, but others came looking for her. A reckless warrior guards her steps, but will Malachi’s own past blind him to the truth of who Ava might be? While ancient forces gather around them, both Ava and Malachi search for answers. Whispering voices. Deadly touch. Their passion should be impossible... or it could be the only thing that will keep them alive. THE SCRIBE is the first book in the Irin Chronicles, the new paranormal romance series from Elizabeth Hunter, author of the Elemental Mysteries.
Читать О книге
×