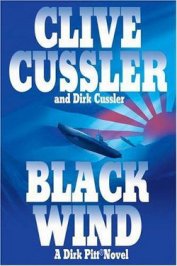 Clive Cussler's dazzling new Dirk Pitt(r) adventure. Nobody has been able to match Cussler yet for the intricate plotting and sheer audacity of his work, and *Black Wind* sets the bar even higher. In the waning days of World War II, the Japanese tried a last desperate measure-a different kind of kamikaze mission, this one carried out by two submarines bound for the West Coast of the United States, their cargo a revolutionary new strain of biological virus. Neither sub made it to the designated target. But that does not mean they were lost. Someone knows about the subs and what they bore, knows too where they might be, and has an extraordinary plan in store for the prize inside-a scheme that could reshape the world as we know it. All that stands in the way are three people: a marine biologist named Summer, a marine engineer named Dirk, and their father, Dirk Pitt, the new head of NUMA. Pitt has faced devastating enemies before, and has even teamed up with his children to track them down. But never has he looked upon the face of pure evil . . . until now. Filled with dazzling suspense and breathtaking action, *Black Wind* is Cussler at the height of his storytelling powers.
Читать О книге 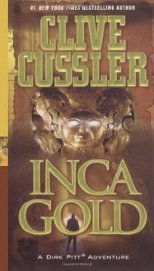 When a tsunami hit a Spanish treasure galleon, all trace of a golden hoard greater than that of any pharaoh's vanished into history. Until NUMA agent DIRK PITT dives into an ancient sacrificial pool far into the Andean jungle in order to rescue two archaeologists, and plunges into a vortex of corruption, betrayal, and death. A sinister crime syndicate has traced the long-lost treasure -- worth almost a billion dollars -- from the Andes to the banks of a hidden underground river flowing beneath a Mexican desert. Nothing will stop their ruthless and murderous drive to recover the gold. Nothing, that is, until Pitt and his team place themselves square in the path of danger....   From Publishers Weekly A chance rescue of two divers trapped in a Peruvian sinkhole leads series hero Dirk Pitt ( Raise the Titanic! ; Deep Six ) into a search for lost treasure that involves grave robbers, art thieves and ancient curses. Cussler's latest adventure novel features terrorists who aren ' t really terrorists and a respected archeologist who is not what he seems; it all boils down to a race between Pitt and some unscrupulous crooks for a cache of Inca gold hidden away from the Spanish and lost since the 16th century. The villains, a society of art and antiquity smugglers called the Solpemachaco, want to get their hands on the Golden Body Suit of Tiapollo, which contains in its hieroglyphics a description of the Inca treasure's hidden burial place. Pitt ends up searching for a jade box containing a quipu, an Inca silver-and-gold metalwork map to the treasure. The box was stolen from the Indians by the Spanish, stolen from the Spanish by Francis Drake and then lost in the South American jungle, but readers who know Pitt know that that a 400-year-old missing clue is only a minor obstacle. Master storyteller Cussler keeps the action spinning as he weaves a number of incredible plotlines and coincidences into a believable and gripping story. It's pure escapist adventure, with a wry touch of humor and a certain self-referential glee (Cussler himself makes a cameo appearance), but the entertainment value meets the gold standard.
Читать О книге 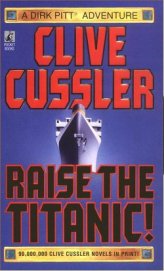 The President's secret task force develops the ultimate defensive weapon. At its core: byzanium, a radioactive element so rare sufficient quantities have never been found. But a frozen American corpse on a desolate Soviet mountainside, a bizarre mining accident in Colorado, and a madman's dying message lead DlRK PITT~ to a secret cache of byzanium. Now he begins his most thrilling, daunting mission -- to raise from its watery grave the shipwreck of the century! In a daring gamble, DIRK PITT locates the Titanic -- and suddenly his crew is in deadly jeopardy. Sabotaged by Russian spies and savage storms, Pitt must stop a diabolical plan for Soviet world supremacy -- or see the mighty Titanic blasted out of existence!
Читать О книге A PLUNDERED TREASURE IN THE PHILIPPINE ISLANDS . . . A NUCLEAR EXPLOSION IN THE PACIFIC . . . AN EVIL PLOT TO BRING THE WEST TO ITS KNEES! A Japanese cargo ship bound for the United States is instantly, thunderously vaporized by Japanese fanatics with a chilling plan to devastate and destroy the Western powers. While Washington bureaucrats scramble, a brutal industrialist commands his blackmail scheme from a secret island control center. But from the ocean depths, NUMA agent DIRK PITT is igniting a daring counterattack. Battling death-dealing robots and a human-hunting descendant of samurai warriors, Pitt alone controls the West’s secret ace in the hole: a tidal wave of destruction waiting to be triggered on the ocean floor!
Читать О книге 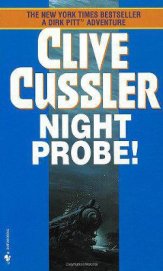 Cussler's most dazzling bestseller. Dirk Pitt's most dangerous adventure. ****Dirk Pitt proved invincible in *Raise the Titanic!* Now, with the future of virtually every person in the world at stake, he is enlisted to spearhead his most daring mission yet—the rescue of a vital document for the United States. To an energy-starved, economically devastated America, possession of this document is worth billions. But to Great Britain, it’s worth a war. Pitt’s quest plunges him into a head-to-head confrontation with Britian’s most cunning secret agent—and into the throes of a torrid love triangle. As time runs out for a desperate America, Dirk Pitt races toward an underwater clash more terrifying than anything Clive Cussler has ever created—the breathtaking climax of **Night Probe!****
Читать О книге 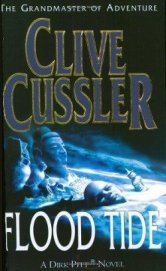 AN UNDERWATER GRAVEYARD IN THE PACIFIC NORTHWEST... A MYSTERIOUS SEAPORT IN THE LOUISIANA BAYOUS... A DIABOLICAL PLOT TO DESTROY AMERICA! When NUMA agent DIRK PITT rescues a beautiful undercover agent in a daring underwater operation at Orion Lake, just north of Seattle, he confronts a sinister network run by Qin Shang, a ruthless smuggler who sells Chinese immigrants into slavery. Shang's campaign contributions have bought him a collection of powerful U.S. politicians, but Pitt is not a man to be subverted by politics. As he moves to probe Shang's mystifying seaport in the Louisiana bayous, his investigation involves him in an adrenaline-pumped race up the Mississippi River and a desperate dash to recover sunken Chinese treasures lost half a century before. And in Qin Shang, Pitt faces ones of his most formidable foes -- a madman bent on killing thousands of innocent civilians with a catastrophic surge of mass destruction.
Читать О книге
×